Angular is a popular framework for developing mobile and web applications. The first version of Angular was released in 2012 by Google. Through the years, it has seen tremendous growth with every version enhancing performance and developer experience. In this article we will discuss some of the powerful features of Angular 7. 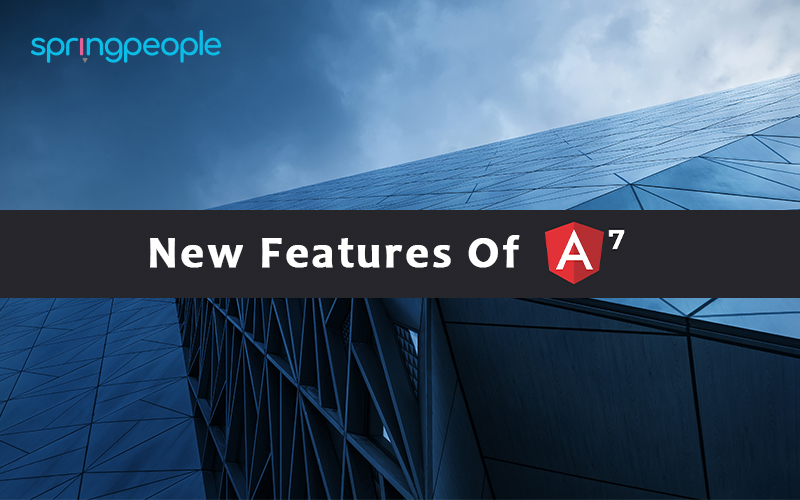 The CLI prompts in Angular 7 has been upgraded to v7.0.2 with several new features. Eg. Users will now be prompted when they type commands such as ng-new, ng-add and @angular/material. This would enable them to identify the in-built routing, SCSS support and many other things.

Additionally, CLI prompts have also been added to Schematics. As a result of which  CLI prompts will prove beneficial to schematics.

There is support available for different upgrades in dependencies in Angular 7.

In Angular 7, the latest version ofRxJs (version 6.3.3) is available. It contains a host of remarkable changes and additions.

TypeScript version in Angular 7 has been updated from 2.7 to 3.1, which is its latest release. Moreover, it is mandatory to use the latest version of TypeScript while working with Angular 7.

Angular 7 features a new type of Virtual Scrolling that has the ability to load and unload certain items from the DOM based on the part of the list that is visible. This leads to a faster experience for the users who has extremely large scroll lists. With the virtual scrolling bundle, the users are offered helpers that responds to each and every scroll event.

In Virtual Scrolling, a high performant way is activated by enabling the height of container element to be precisely the same as the height of the remaining elements total number that are to be rendered. With this, the only visible items in view are rendered, thus creating a faster end-user experience.

With the new drag and drop module of Angular 7, users can now easily develop drag and drop interface which is backed by sorting within a list, transfer items between previews, placeholders, lists and support for free draggings, custom drag handles, and animations.

In Angular 7, material design has received minor visual updates and enhancements. Other improvements in Angular Material and CDK includes dynamic loading and unloading of parts of the DOM, virtual scrolling, refresh,large lists of data and virtual scrolling. Moreover, drag-and-drop functionality can now be fitted to the applications in Angular 7 by either importing DragDropModule or ScrollingModule.

Google’s development team has always been particular on enhancing performance and during the process, they identified that in the production most of the developers were employing reflect-metadata, which was actually needed only in the development. For fixing this issue, a part of Angular 7 has been made to remove this from the polyfills.ts file automatically.

In Angular 7, there is a new compiler available, called as the Angular Compatibility Compiler (ngcc). It  makes possible 8-phase rotating ahead-of-time (AOT) compilation. Majority of the applications of angular will be able to see a large cutback (95-99%) in their bundle sizes. You know it’s an important progress when Angular package’s actual size becomes significantly lesser than what majority of the languages would take for storing the string ‘Angular’.

Looking at the new features it becomes clear that Angular 7 is a more accessible solution that is focused on the modern technological trends. If you are looking to reap the benefits of this, check out SpringPeople Angular training

Making A Case For AI In LMS »

Making A Case For AI In LMS »