Artificial Intelligence(AI) is the simulation of human intelligence by machines. In other words, it is the method by which machines demonstrate certain aspects of human intelligence like learning, reasoning and self- correction. Since its inception, AI has demonstrated unprecedented growth. Sophia the AI Robot, is the quintessential example of this. The future of Artificial intelligence is hazy. But going by the bounds of progress AI has been making, it is clear AI will permeate every sphere of our life. Listed below are the diverse ways in which AI can change in the future.

The scope of AI in science is the largest. Recently ‘Eve’ was in the news for discovering that an ingredient found commonly in toothpaste, is capable of curing Malaria. Here the subject in appreciation ‘Eve’ is not a human scientist, rather a Robot created by a team of scientists at the Universities of Manchester, Aberystwyth, and Cambridge.

Eve’s example hints at the possibility of AI playing a bigger role in science in future, not just merely for augmentation. AI will be able to create science, not merely do science as evidenced by the Robot Scientist, Eve. Automation using AI for drug discovery is a field that is rapidly growing, mainly because machines work faster than humans. AI is also being applied in related areas such as synthetic biology for the manufacture and rapid design of microorganisms for industrial uses. Taking all this in stride, AI is sure to transform science as we know it.

The future application of AI in cybersecurity will ensure in curbing hackers. The incidence of cybercrime is an issue that has been escalating through the years. It costs enterprises in term of brand image as well as material cost. Credit card fraudery is one of the most prevalent cybercrimes. Despite there being detection techniques, they still prove to be ineffective in curbing hackers. AI can bring a remarkable change to this. Novel AI techniques like Recurrent Neural Networks can detect fraudery in initial stages itself. This fraud detection system will be able to scan thousands of transactions instantly and predict/ classify them into buckets. RNN can save a lot of time as it focuses on cases where there is a high probability for fraud.

The launch of iPhone x with face recognition feature was a step towards AI future. In the coming years, iPhone users might be to unlock their phones by looking into the front camera. Authenticating personal content is not the only use of facial recognition. Governments and security forces make use of this feature to track down criminals and identify citizens. In the future, facial recognition can go beyond physical structure to emotional analysis. For example, it might become possible to detect whether a person is stressed or angry.

One of the ways AI will benefit business is in the field of Data Analysis. AI would be able to perceive patterns in data that humans cannot. This enables business’ to target the right customers for the product. An example of this is the partnership between IBM and Fluid. Fluid, a digital retail company uses Watson – an AI created by IBM for insightful product recommendation to its customers.

AI-guided transport will no longer be confined to the pages of sci-fi literature. Self- driving cars have already populated the market, however, a driver is required at the wheels for safety purposes. With Google, Uber and General Motors trying to establish themselves at the top in this market, it will not be long before driverless vehicles become a reality. Machine Learning will be crucial in ensuring that these Automated Vehicles operate smoothly and efficiently.

Robotic Process Automation is the application of machine learning to automate rule-based tasks. It will help people to focus on the critical aspects of their job while leaving the routine aspects to machines. Automation can range from data entry to complete process automation. The reach of AI is also expected to blanket jobs that are risky or health-hazardous like bomb diffusion and welding.

Tech has advanced in terms of Emotional Quotient. Virtual assistants Siri, Cortana & Alexa show how the extent to which AI comprehends human language. They are able to understand the meaning from context and make intelligent judgments. Back in 2015, a companion robot called, ‘Pepper’ went on sale. All the initial 1000 units were sold within a minute. Overall, considering all this, the possibility of emotional bots might become a reality in the future.

The application of AI in sales and marketing seems a definite, considering the fact that marketing professionals leave no stone unturned to benefit their business. AI can increase the efficiency of sales and marketing organization. The focus will be on improving conversion rates and sales. Personalised advertising, knowledge of customers and their behavior gleamed through facial recognition can generate more revenue.

Reasons Why You Should get Certified in AI now 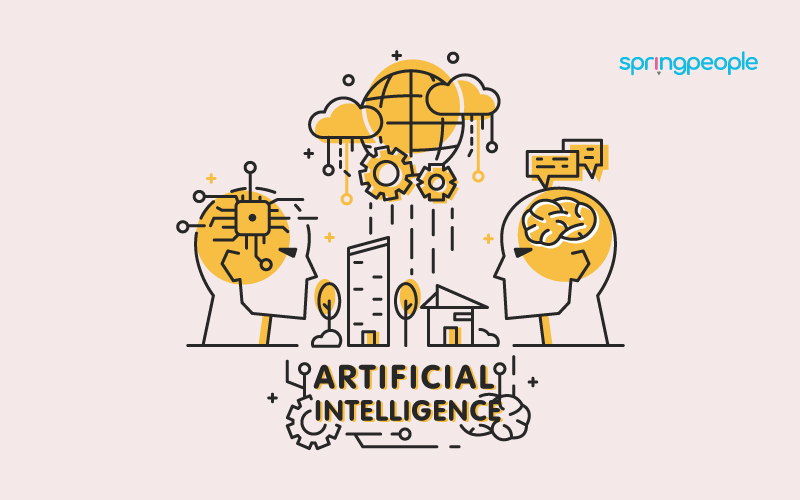 AI is the latest buzzword in Tech. All the major enterprises will make use of AI in the future to improve their productivity. Tech giants like Apple, Google and Facebook have already climbed on the bandwagon of AI. So what are you waiting for?

AI is going to permeate every job sector in the future. It can create new career paths in the field of Machine learning, Data mining, and analysis, AI software development, program management, and testing.

The demand for AI certified professionals will grow along with the developments in AI. Gaining a certificate in AI will give you an edge over other IT professionals as AI is the future of IT.

Overall the future of AI seems too large to comprehend. But there is no denying the opportunities AI can open for those who invest in it. Check out the certification in AI by SpringPeople and step into the future.

Why Robotic Process Automation Is Here To Stay? »

Why Robotic Process Automation Is Here To Stay? »