Windows Powershell is a native task automation scripting language with a command-line interface (CLI). It is built on top of the .NET Common Language Runtime (CLR) and accepts and returns .NET objects. The command-line interface is nothing but a text-based user interface used to execute operating system functions in a single line. Powershell was announced as an open-source scripting language on 18th August 2016 that can be used on any operating system and any technology. 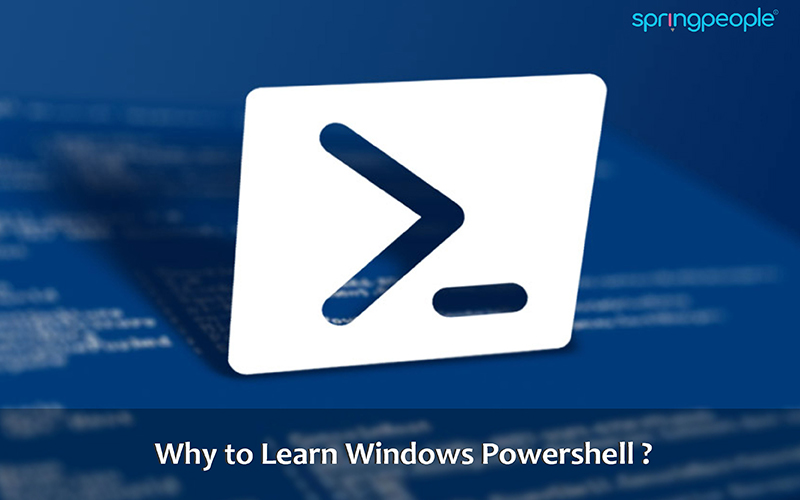 Windows released many versions of Powershell. The first version of Powershell was released in 2006. With constantly growing capabilities and improvements Microsoft released the latest version, Powershell 7.0 in March 2020. It is an open-source and cross-platform( Windows, Linux, and macOS) automation tool. It is optimized to handle structured data (JSON, CSV, XML, etc.), REST APIs, and object models. Also, It is built to manage heterogeneous environments and hybrid clouds.

PowerShell 7.0 currently supports the following operating systems on x64, including:

Learning Powershell is beneficial for the administrators interested to write and understand scripts to make their work automated.

The reasons to learn Powershell are:

Learning PowerShell is relatively easy. It follows the ‘Verb Noun’ convention which is easy to read and execute the command. With a pipeline feature, you can execute complex tasks with a command line itself. No prior scripting or programming knowledge is required. There is also a Get-Help command which makes scripting much easier with a lot of information and helps you with your queries. Join the course ‘ Windows Powershell’ offered by SpringPeople to learn Powershell from scratch.

With a single function command-line tool ‘cmdlet’ (command-let), automation becomes much easier. The combination of cmdlets is mainly used to perform complex tasks. The cmdlet is written in a verb-noun form such as ‘Get-Help’, ‘Get-Command’, ‘Get-Process’ etc. Any professional can use cmdlets efficiently for automating purposes. There are more than a hundred basic core cmdlets. Apart from that, you can create your own cmdlet using scripts and share it with other users.

Microsoft states that Powershell is built on top of the .NET Common Language Runtime (CLR), and accepts and returns .NET objects. This means that instead of plain text as output, Powershell delivers data in a directly usable format. The combination of these objects can solve all the complex calculations in a simple way. You can further use the object directly or modify it. Hence, it makes it much easier for system administrators to execute their tasks.

Can be applied on any system

Earlier versions of Microsoft powershell was only associated with Microsoft workloads. Since 2016, Powershell Core 6.0 released it was announced as cross platform and open source. It means, not only on windows, you can use Powershell on Linux and macOS also. With this, you will be able to run the same scripts without having to spin up virtual machines hence reducing the friction between the users with a mixed IT environment. By learning Powershell, you can be a great fit for any IT environment.

Powershell acts as a saviour when you are delivering a solution or run a script for the same issue in different computers. With Powershell you need not to log in to every PC to run the script or make any changes. Whether you want to  install updates or configure settings or gather any information you can enable powershell remoting to scale your scripts to multiple computers. This helps IT administrators to handle the corporate level administration work without disturbing the workflow.

Earlier, knowledge of Powershell was an added advantage to get a job in IT administration. Now it has become mandatory for jobseekers to have the knowledge of powershell in many IT firms. According to Payscale,

An average salary for a professional  possessing Windows Powershell skill in India is ₹717,859

What are the uses of Powershell?

There are many uses of Powershell to make system administrator’s work much easier such as, adding or deleting accounts, to find, filter, or export any information. It administrators can also have easy access to and control over Windows Management Instrumentation (WMI) and Component Object Model (COM) for efficient administration management.

There are many useful functions to run a command sequence for system administration. By using Windows PowerShell Integrated Scripting Environment (ISE), you can create scripts or test scripts and further use it whenever required. It provides an intuitive way to turn time-consuming grunt work into simple, repeatable, scriptable commands.

« Is It Worth Getting AWS Certification in 2020?

Natural Language Processing: A Short Introduction to get you started »

With over a 12+ years of experience, Sheikh Dawood, a highly sought trainer, has an expertise on Cloud services such as Office 365, Exchange Online, One Drive, Skype and Azure. He has a plethora of certifications under his belt, including Microsoft Certified Azure Fundamentals and Administrator Associate. His areas of specific interest include VM storage, virtual networks, NSG, Azure AD, Access Policies, Microsoft 365 security, etc.

« Is It Worth Getting AWS Certification in 2020?

Natural Language Processing: A Short Introduction to get you started »