DevOps uses languages for software development & deployment automation. The recent State of Database DevOps Report revealed that within two years, 80% of companies will adopt DevOps. This study also stated that 75% of enterprises already have in-house developers who work on both DevOps applications and DevOps databases. Though integrating database changes into a DevOps process is a important task, the biggest challenge is synchronizing application and database changes, and overcoming different development approaches. To become a successful DevOps engineer and to be a pro in either side of DevOps, here are 8 programming languages you must know – 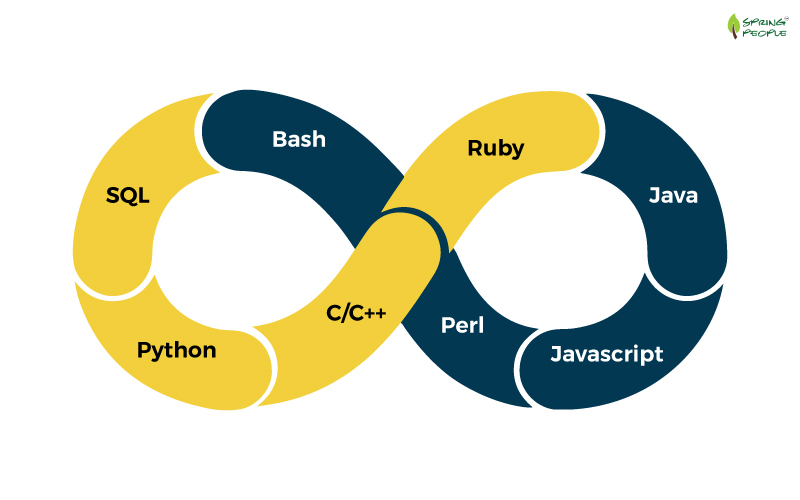 SQL (Structured Query Language) is a computer language to store, manipulate, and query data stored in relational databases. The version SQL server 2017 supports Linux OS and it’s containers are capable of running on Windows, Linux, and MacOS. It’s because of this containers support, SQL is used in DevOps. Developers working with Continuous Integration/Continuous Deployment (CI/CD) pipelines use SQL Server 2017 containers as a component of their applications for an integrated build, test, and deploy experience. While using SQL code there are four  issues to take care of –

First written by Brian Fox, Bash is the most important and frequently used Unix Shell. Bash is a POSIX-compliant shell, but with a number of extensions. Though Bash is an implementation of the POSIX.2 shell specification, there are areas where the usual default behavior differs. The bash `posix mode’ changes the bash behavior so that it aligns with the spec more closely. Posix mode is entered by starting bash with the –posix option or executing `set -o posix‘ after bash is running. The command shell and scripting language of Bash is used to automate processes on ‘N’ number of Linux servers around the world.

Perl can be used for simple to complex tasks, for small projects or major projects. For web apps, text processing, interfacing with databases, low and high-level apps, GUI development, and more – Perl is often a quick fixing solutions.

Designed to create network-centric applications, JavaScript is a lightweight, interpreted programming language. It was earlier named as LightScript but Netscape changed its name to Javascript. For DevOps, Javascript is more on the “dev” front. With advantages like less server interaction, immediate feedback to the visitors, increased interactivity, richer interfaces, Javascript is widely preferred for DevOps engineers. For one who is well familiar with this programming language and have a proper stack awareness, solving any frontend or backend problem is as easy as ‘abc’.

Java is a general-purpose programming language. Java is object-oriented, class-based and concurrent in nature and has been designed in such a way that the implementation dependencies can be reduced as much as possible.

Ruby was developed by Yukihiro “Matz” Matsumoto and he ensured that he blend the good features of his preferred languages like Perl, Eiffel, Ada and Lisp. The primary objective of the developer, also known as “Matz” was, to keep the language natural rather than making it simpler.

Ruby is also considered to be a very flexible language as the developers can alter the parts of the language as per their requirement. Along with this Ruby has abundant other features like any other conventional programming language.

Original Ruby implementation was done in the form of MRI (Matz’s Ruby Interpreter). There were many other alternate implementations like JRuby, Rubinius, MagLev, IronRuby, MacRuby (and its iOS counterpart, RubyMotion), mruby, HotRuby, Topaz and Opal. Ruby implementation maturity is measured by tracking their ability to run Ruby on Rails (framework)

C/C++ are high level programming languages. Dennis Ritchie is the inventor of C language and it was developed during 1970s. On the other hand, C++ is considered as the successor of C.  In 1979, Bjarne Stroustrup, the creator of C++, started working on the new programming language. His basic idea was to create “C with Classes”/ Later in 1983, it was renamed as C++. As of 2017, C++ is the third most used and popular programming language after Java and C.

In the real world, there are many applications of C/C++. We have highlighted a few of the most popular applications. Many OS and kernels are coded using C language. Windows and UNIX kernel are a few which are used extensively. Games like Doom 3 were developed using C++. Game development tool like Unreal Engine is also written in C++. C++ enables the developers to build applications that can support real-time simulation, mobile sensor applications and high-performance image processing. Popular softwares like Maya 3D is coded in C++, which is used for 3D modeling and creating visual effects and animations.

Python is a programming language based on the fundamentals of the Object-Oriented Programming. It was developed by Guido Van Rossum And he started implementing Python in late 1989. It is very easy to learn and has features like dynamic typing. It is a very powerful scripting tool and is interpretable in nature.

2 thoughts on “8 Must Know Programming Language for DevOps”