In this blog we will explore how RedHat Ansible Automation can aid your security automation program at each and every step of its evolution stages. This blog can be useful to you regardless of which career level you are in – an IT professional with the responsibility of supporting his organization’s security operations or a security professional dipping their toes in automation for the first time.

How Can Red Hat Ansible Enhance Your Security Automation Program 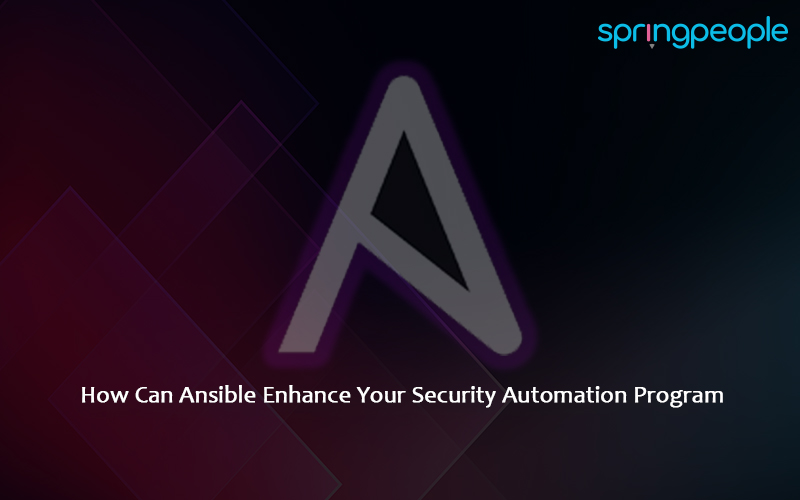 Given the complexity and scale of today’s IT infrastructure, it is virtually impossible for human operators to identify and respond to the countless number of cyber crimes that incapacitates large organizations each day.

Automation entered the security domain only in recent times. It helped the already overwhelmed security professionals to combat the modern day cybersecurity crimes that have astounded everyone with their level of innovation and speed.

The availability of modern automation platforms such as Red Hat Ansible Automation, enables IT companies to deal effectively with the complexity and unprecedented scale of today’s modern infrastructure. They also enjoy a never-before flexibility which enables them to extend automation practices to novel areas.

For instance, with Ansible Network Automation network, operators were enabled to the next group who structurally approached automation. This helped to simplify operations and maintenance of their multi-vendor, rapidly flourishing infrastructures.

Now, we will explore the three main stages that most enterprises follow in their automation for security response journey.

In this initial stage, security operations are organizations sole focus of attention. The processes of remediation and investigation are spread across separate siloed teams, who are usually situated in various physical sites.

It is common for different teams to react to the same events in an ad-hoc manner. Also, cross-team cooperation and communication, if present, is quite formal and handled via tickets

Some of the common goals when you approach an automation project during this stage are:

During this situation, Ansible automation provides YAML language, which is readable by humans as a method for easily describing these processes, comparing them and identifying a good workflow that can be employed as a base for standardization. The result of this process of standardization is a series of playbooks and roles that the user can consume immediately via Red Hat Ansible Engine. This becomes the base for a library of response workflows that you can expect to flourish with time with the addition of processes and actions.

In case security automation projects succeed, the consequent workflows can be divided and can be given to various teams in security organizations, who are entrusted with the responsibility and control on their part of the process.

Security operations are approached in a holistic way by more mature organizations. At this juncture, usually a security governance entity, which can be a decision table constituted of representatives from various security practices or a dedicated team, is set in place. Most of the security teams realize the numerous advantages of executing and operating security operations methods and services that are cohesive and that has the likelihood of work in conjunction with their broader IT practice.

When Red Hat Ansible Tower is initiated at this stage, it can unite a number of security teams together and thus, enable them to work collaboratively through organizational features including centralized access to the whole set of RBAC and library of response workflows. Moreover, with Ansible Tower users have the ability of connecting different types of playbooks, from various teams, in conditional and structured workflows that is a testimony to the higher-level security procedures.

One of the most popular steps towards achieving this goal is by launching a Security Information and Event Management solution(SIEM) for centralizing investigation processes and for making decisions that can be easily shared with all the teams who are a part of a particular attack response.  Ansible tower can integrate easily with a SIEM owing to its REST APIs, because of which automated actions are available directly from the same tool where these activities are determined.

In this stage, security teams approaches SOAR, ie Security Orchestration, Automation and Remediation (SOAR) tools for orchestrating and designing the higher-level security workflows that has been recognized in the previous steps.

Security organizations who have successfully developed a security operations programme like the incident response program and its playbooks, can try to achieve the following set of goals:

Today, only a few organizations reach this stage. Developing a security automation practice that is fully mature is important for addressing the sophistication of today’s cyberthreats.

As you can see, Red Hat training can be a plus for streamlining your organization’s security operations.

« Differences Between Microservices Vs Monolithic Architecture

What You Should Know About Machine Learning »

« Differences Between Microservices Vs Monolithic Architecture

What You Should Know About Machine Learning »