In the past few years, software containers have significantly changed the way IT organizations run, deploy, build and maintain applications. The advantages that containerization offers made it very compelling for the organizations to adopt. In this post, we will run through the benefits docker and kubernetes provides to an organization.

Container technology, popularly known as just a container is a method to package an application in such a way so that it can be run with its dependencies seperated from the other processes. With container technology the whole procedure became more efficient and standardized. Compared to normal virtual machines containerized platforms are more portable, require fewer configurations and can be deployed quickly. Users associated with container environment are likely to hear about two well-known tools and platforms used to frame and steer containers. These are Docker and Kubernetes. 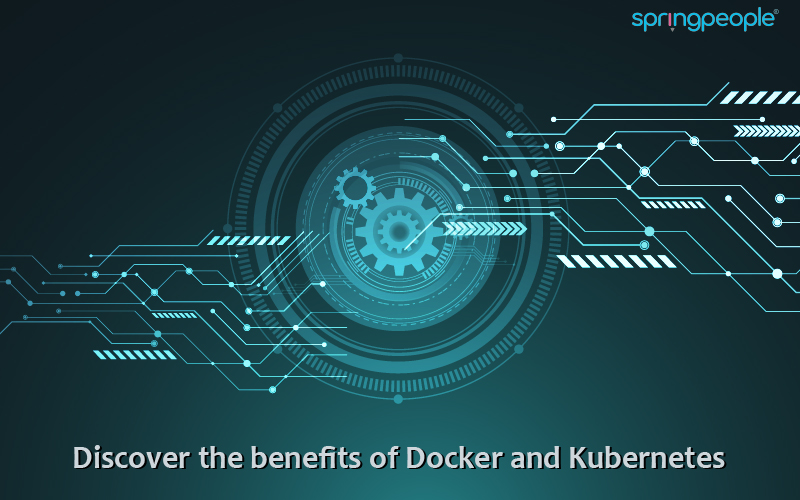 Use Docker to systemize and manage your app

Docker is a tool (container run time) designed to make it easier to create, deploy and run containerized applications which helps developers to optimize software development cycle at various stages in SDLC.

A container does not have an operating system installed on it which leads to optimized compute resource consumption in comparison to a virtual machine which would have a complete operating system installed and a number of components not necessary for your application running on it. Compared to virtual machines this also reduces the entire time taken to bring up application, which is a few seconds in case of containers.

Docker ensures that your applications and resources are segregated and isolated and each application uses only that much of resources that is assigned to them. A particular application won’t use all of the available resources which would usually lead to performance degradation or complete downtime for other applications.

Another benefit of using Docker is that it will run on all machines no matter which server or whose laptop they are running on that supports the container’s runtime environment. This means the developers will spend less time on setting up environments, de-bugging environment related issues keeping the underlying operating environment clean and minimal. In short Docker allows us to BUILD, SHIP & RUN.

Usually enterprise software must be such which responds to changing conditions rapidly. That means both easy augmenting to meet demand and easy upgrading to add new features as the business desires. Docker makes it really easy to put new versions of software into production quickly and go back to previous version if need arises.

In short Docker allows us to BUILD, SHIP & RUN our applications in software containers which contain all the libraries & binaries required to keep our application running smoothly.

Kubernetes: Your next application platform

Kubernetes is a powerful container orchestration tool that automates the deployment and management of containers on scale across virtual machines. Simply running containers in production is not enough, they need to be managed and Kubernetes provides some great features that makes operating with containers smoother. Kubernetes decreases many of the manual tasks traditionally related with co-ordinating containers in production by automating their scheduling and management. Kubernetes maps out how applications should work and how they should work together with other applications.

Why organizations are adopting Kubernetes?

Kubernetes inspires developers to build distributed systems that comply with the principles of immutable infrastructure. In this eco-system, if you want to update your application, you can simply do so by building a new container image with a new tag, and deploy it, killing the old container workload with the old image version. This way, you always have a record of what you did and if there was an error in your new image, you could easily step backward to the previous one. Another benefit of Kubernetes is that it is able to run any app in any cloud, or in any mix of clouds be it public or private. It allows you to derive optimum utility from containers and build cloud-native applications that can run anywhere, independent of cloud-specific requirements. It also has a feature of self-healing which restarts containers that fail, replaces them and does not advertise them to clients until they are ready to serve. Kubernetes declaratively manages services, which assures the deployed applications are always moving the way you want them to run.

Docker and Kubernetes Together

Himanshu Rathi, SpringPeople’s Technology Evangelist has a deep expertise in Cloud, DevOps, Containers, Infrastructures, Monitoring tools, PAAS, Scripting, Configurations, Operating systems, and related technologies. With over a decade of IT experience, he has been at the forefront of several notable Cloud/DevOps projects viz. Snapdeal Cloud Platform adoption, enablement of Cloud at Zomato, migration of Jindal Steel to Google Cloud Platform, and assisting in the Avago takeover of Broadcom in the US, to name a few. Himanshu is a keen learner and an avid follower of the latest trends in the technology landscape. Additionally, he holds numerous certifications from Google, AWS, Chef, Docker, etc.