For any business, choosing the right framework for a new Javascript implementation is crucial. This will have a direct impact on scalability of the app or website, further code maintainability, and project’s durability and ability to fit in deadlines. While choosing a framework, React & Angular JS are two of the most popular options that are discussed. Let’s explore more about the pros & cons of React & AngularJS.

Jordan Wake, a software engineer working for Facebook, developed React JS and implemented it on the newsfeed of Facebook, in 2011. The development for React JS was very much influenced by XHP, an HTML component framework for PHP. Later in 2012, React JS was implemented on Instagram as well.

As React JS is subject to curation by Facebook’s developers and is free and open source, this easily became a new favourite for the programmers as they get a chance to get codes developed by elite and most enthusiastic developers.

Angular JS is a powerful client-side technology that embraces and extends HTML, CSS and JavaScript. There are few compelling features about Angular JS which are not only useful for the developers but also for the designers.

Data-binding is the most useful feature in AngularJS. Web application is mostly code based. Data binding makes this code disappear and make it easy to focus on application. Also, the template is just plain-old-HTML in Angular JS. Directives is another most unique feature of Angular JS as it is used to create custom HTML tags to personalize and decorate widgets.

Here are few basic differences mentioned in the table below. 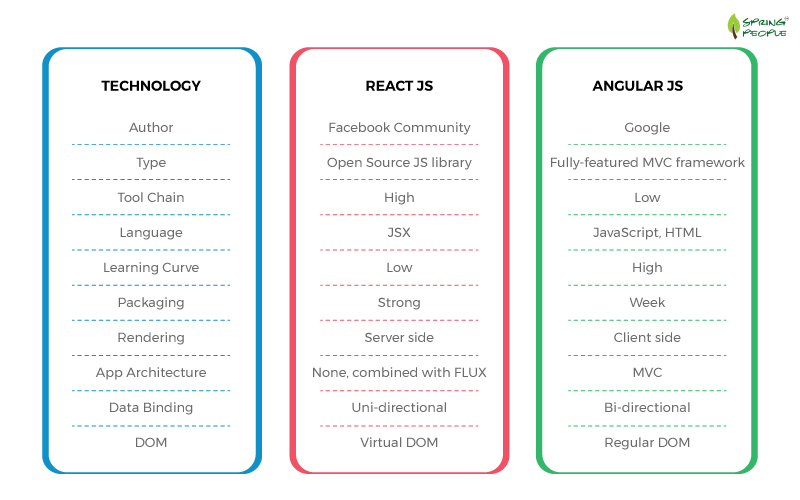 Other critical differences which make or break these frameworks are –

The most important difference between Angular and React JS is, Angular is a complete framework for web application development, whereas on the other hand, React JS is a library which only deals with views.  To make React JS work like any other framework, the developers need to add few additional libraries.

Angular JS is bit more complex, from model point of view, as developers can’t use large models in Angular JS. Although it has its own benefits, like keeping the code simpler. The negative part is, reusability of the code is not very effective. For example, server request needs to be terminated and rebuild again, although it is being used frequently. This actually have a direct impact on the performance of the web application. On the other hand, React JS helps the developers to decide on the way they build their codes, without any impact on the performance of the application.

Event handlers in Angular are assigned via directives, to various portions of the view. In Angular, directives are a major component. Whereas, in React, the event handlers set various custom attributes on the HTML element being developed.

Directives again play an important role in Nested view of Angular. Although each directive has its own scope, they can still contain the reference of another directive. These nested directives will also have their own scope. To render child elements from a directive, the concept of Transclusion is used in Angular.

In React, Nested elements are way to simpler than in Angular. It is as simple as declaring a class and then referencing the child class in the parent class.

Both Angular and React are easy to scale but the biggest advantage for Angular is, it has a very powerful CLI.

Both Angular and React has the methods to loop some data. In Angular, the ng-repeat directive is used to achieve the desired functionality. This directive is a built-in directive of Angular framework. In React, it is way too simple. The developer just need to loop over various HTML elements together and place it in an array. This can be achieved due to the use of JSX.

In Angular, injecting data in a directive is performed by scope. A scope can be considered as an object or container, which holds the data for various controls like directives and controllers. One root scope is defined in Angular, injected with $rootscope. This root scope is accessible by any Angular component. There is also a concept of isolated scope, where the scope of the directive is separate from the controller’s scope.

In React, the data is injected in the view when the view is constructed, either when the root view is created or by using a nested view. Inside the class, to access the data of the current context, props property of the context is used.

Both the frameworks are powerful and flexible and can be used diversely for web application development for all types of businesses. It is safe to state that neither is worse or better than the other. Depending upon app goals and particular system constraints, one can choose React JS. Whereas Angular is usually used to develop  the core skeleton for a front-end app and React helps to fine tune its specific features.