Did you know? With a plethora of usage in the various domains, Python bags the number 1 position in PYPL’s  Top 10 Programming Languages Ranking 2020. Also, Python reserves the top spot in other programming language indices such as Redmonk, TIOBE, Stack Overflow. Undoubtedly,  it is one of the fastest-growing programming languages resulting in high demand for Python developers. A python developer can earn up to $118.000 a year!

The reasons for the omnipresence of Python are many. To name a few,

According to research, ‘56% of Python developers work on their projects independently.’ Also, Python is one of the official languages used by Google! 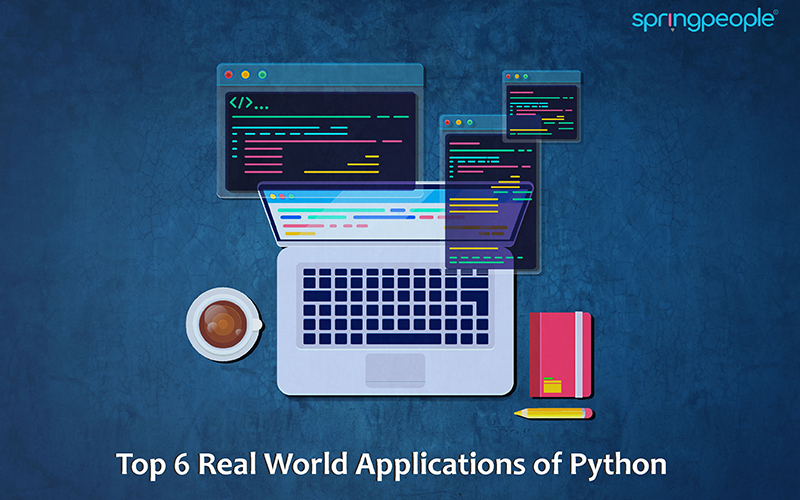 Many popular apps are built with Python, such as Netflix, Instagram, Dropbox, Reddit, Quora, Spotify, etc. Considering all the features mentioned above, the following are the real-world applications of Python:

Isn’t it easy when a lot of manual and repetitive tasks are automated?. With approachable syntax, excellent readability, and built-in libraries, you can almost automate everything with python. From reading files to interacting with external APIs to Web Scraping, everything can be automated. Python can even automate server-level administration tasks by replacing the shell scripting with python. We can also use Python to automate the PowerPoint presentation and file transfer.  Sending emails is one of the main tasks of the day in any field. It can be automated using Python. To be precise,  with smtplib library, you can send emails via the Simple Mail Transfer Protocol (STMP).

In today’s data-driven world, Data science has become an integral part of the organizations now. The decisions are taken based on the real data-driven facts. It is all about integrating the data into the business process. Python is said to be the ‘de facto language’ for data science. There are many Python libraries built for data science such as NumPy, Pandas, Matplotlib, SciPy, sklearn, tensorflow, etc.

Also, Pixel restoration, Real-time analysis of behaviour, Translation, Generating voice are some of the deep learning applications with Python.

Python makes everything simple. It simplifies the web development process through high-quality frameworks such as Django, Flask, Pyramid, Web2py, TurboGears, CubicWeb, etc. It follows ‘Less is more.’ Python has a lot of common expressions that help developers in web development with less code. Also,  Python doesn’t break the code for minor mistakes that results in continuity of the work process. It also has libraries for internet protocols such as HTM, XML, JSON, easy to use socket interface, etc.

The gaming industry has evolved a lot in recent years. Python functionalities and add-ons prove to be the best choice by the game developers for the rapid prototyping of video games. Pysoy library supporting Python3 is a 3D game engine, used for game development widely. There are many python frameworks such as Pygame, Pykyra, Pyglet, PyOpenGL for game development. You all must have heard about the interactive games Battlefield 2, Civilization IV, World of Tanks, etc. All these games have been developed using Python.

Audio and Video applications are ruling the internet world!. Youtube is one of the great video applications that is created using Python. Python libraries and frameworks such as Gstreamer, MLT, MoviePy are used for developing Audio and Video. Jokosher is a complete audio application built by python to record, edit, mix, and export the audio. The OpenShot is one of the open-source video editors, which is written in python using the MLT framework and PyGtk.

There are many other tools, libraries, and frameworks written in python to develop audio and video applications.

Desktop Graphic User Interface (GUI) is an essential aspect of desktop applications to convey information. Python is an interactive programming language. It has a wide range of frameworks and toolkit for GUI. PyQt is one of the most potent and popular python interfaces. It is an open-source widget toolkit, available on Windows, Linux, MacOSX, Raspberry Pi, Android-iOS, and different python versions ranging from v2 to Qt v5.

Tkinter, Kivy, WxPython, PyGUI are some of the other popular frameworks for Desktop GUI.

With an independent and interactive approach, python is a preferable language for embedded systems. Messages can be sent through python to form an integrated system that enables the user to automate testing. Also, python is used to receive embedded data that can be stored for analysis.

Discover the benefits of Docker and Kubernetes »

Discover the benefits of Docker and Kubernetes »