Did you know professionals with python programming skills gets the highest salaries among other analytics professionals in India? Their median salary is Rs. 15.1 lakh, an increase of  8.6% since last year. The rapid growth of Python has been well-documented in programming language indexes including TIOBE, Redmonk, PYPL, and Stack Overflow. The speed with which Python has shot up the rankings has earned it the label of being the fastest-growing major programming language in the world.

Other than bagging the best salary in the industry, Python also offers aspirants opportunities in multiple fields including 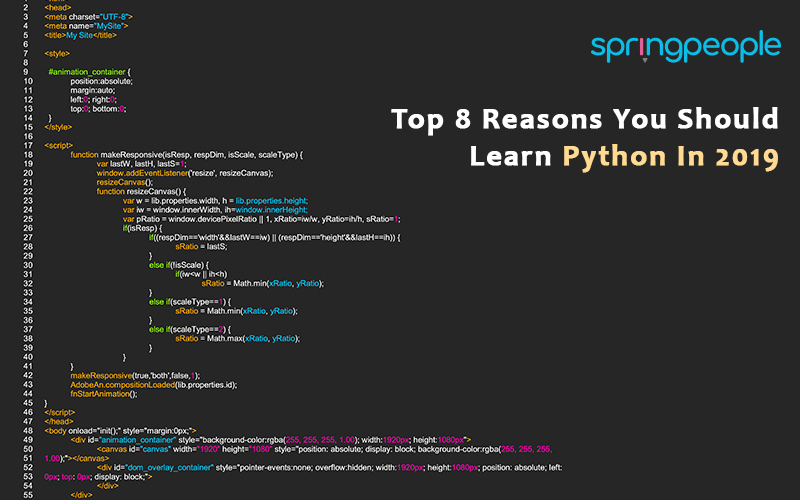 Python appeals to different professionals for different reasons. It appeals to beginners because it is an easy language to master. Experienced professionals in the field of Machine learning or Data Science prefers it as it is rapidly becoming one of the most used programming languages and also has a number of powerful libraries and APIs for data science, artificial intelligence and machine learning.

Now, let us explore the other common reasons why Python should definitely be on your list of skills that you should gain this year.

Today, Python is the favorite language of many data scientists. Data Science is one of the biggest reasons you should learn Python this year. Previously, MATLAB was preferred by private researchers and academic scholars for scientific research. However, the release of Python numerical engines like Pandas and Numpy changed all this and brought Python back into prominence.

Python all deals with matrix, tabular and statistical data and also enables visualization with popular libraries such as Seaborn and Matplotlib.

AI and ML are posed to change the world as we know it. The growth in AI and ML in the last couple of decades has been phenomenal. Everyday we continue to see improvements and significant changes in the algorithms. The most apt example is Google’s search algorithms who now has the ability to answer what you are expecting. Uber is another example of the increasing sophistication of algorithms.

You should know that python is the only major programming language that makes machine learning easy. So, for your next pet project or for just playing around, don’t forget to choose python!

Even Java has machine learning libraries, but what makes Python more remarkable is that there is more content around Python as the developer community currently has an inclination towards this language for machine learning and data science.

The simplicity of the code makes Python very easy for beginners to learn. When you compare Python with other languages like C++ or Java, you will find that the syntax is much more simpler in Python. It is more readable and you don’t have to worry about commas, or semicolons. Additionally, you don’t have to write multiple lines of code for printing a single statement like in Java. In python, all you have to write is print and mention in double quotes whatever you wish to print.

If you are using Python and you are stuck or want to learn to learn something, there is immediate help available. Python has a large number of resources available in the internet itself including the likes of reference manuals, tutorials, videos, forums etc. Additionally, if there is any technical issue you can directly seek help from the thousands of python community members who are available on facebook, twitter, and forums. As Python is an open source programming language, you will always find people who are trying to keep it updated with the current trends, bring out newer versions of the language and introduce innovations.

Everyone who has worked with the language will agree that Python is fast, reliable and efficient. Python applications can be deployed in any environment and there is little or no problem with any environment. As the language is versatile, those who use python can work across a number of domains including desktop application, mobile application and many more. Python is not bound to a single platform and provides the same experience everywhere.

Like Java, Python is also known for its extensive libraries, modules and frameworks that enables developers to do whatever they want to do. They also make application development very easy.

There are several libraries in Python suitable for different needs. SciPy and NumPy are popular for data science’ Flask and Django for web development, and TensorFlow, Pandas, Keras, Scikit- Learn for data science and machine learning.

This programming language is used by established companies for validating products or ideas. With a number of built-in testing framework, Python covers fastest workflows and debugging. Additionally, there are also many modules and tools available in python to make things easier like Splinter and Selenium.

Python frameworks such as Robot and PyTest enables it to support cross-browser and cross-platform. As you know testing is a tedious task and python is the apt booster for it. So, you should definitely go for it!

Most people know Python as a programming language. What many don’t know is that it can also be used as a Scripting language. In scripting:

Once you check the code it can be used many times, So by automation, it would be possible to automate specific tasks in a program.