When an organisation is completely or partially migrating to cloud, then it is evident that they are not very pleased with their current infrastructure. Enterprises that have a cloud app and mixed legacy face many challenges like rationalizing the different tools, languages,schemas, databases, formats and also certain issues with parts of infrastructure that makes use of these hybrid pools of data and infrastructure. Migrating to cloud is a good way to for a culture transformation. DevOps and Automation as operations will require more interface with developers and they will be operating more closely with them to shift applications that are more personalised. They are a company’s largest intellectual property.

Cloud Migration & DevOps: What You Should Know 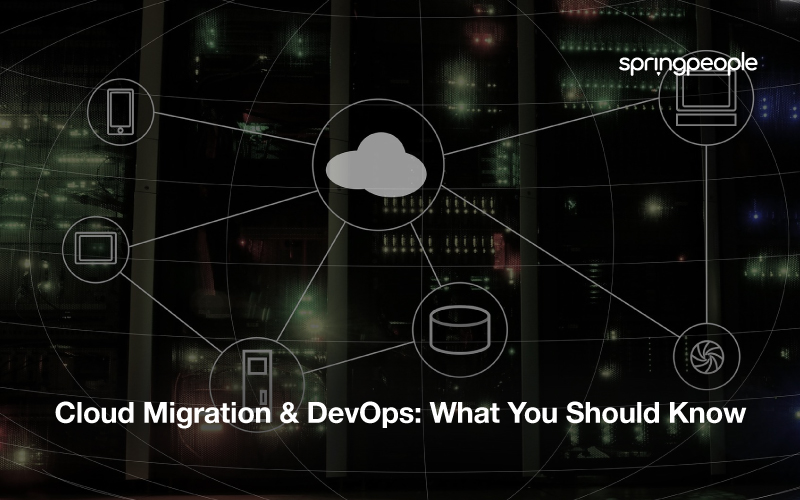 In the process of migrating, first the organisation needs to be aware of what they are changing and the way they are going to accomplish it. This might be little more complex than it appears as organisations are probably moving something that was not previously in a container to an actual container.. They might be trying to develop a mixed cloud environment with numerous private and public cloud providers. Here DevOps plays a large role. There may be cases where the organisation might seem to never stop juggling their tools. There are numerous orchestration tools available that can aid the organisation to avoid the need of custom craft deployments. DevOps can help them to establish monitoring and orchestration to ensure a successful scaling.

Organisations should basically automate their applications in a way that as they move them from one environment to another, it will make them more better, cloud conscious and resilient by making them more consistent with the changes. Migrating will be more efficient when there is proper planning of its entire lifecycle including the exit. DevOps run automation aids in these processes.

A main problem that follows after migration from the perspective of reporting and monitoring relates to the problem of standardization. A standard tool set is not going to work with everything alike. There might arise a requirement for different kinds of tools for various layers of functionality. The main aim should be to capture from all the numerous layers, so the tool set should be representative.

Another problem relates to inconsistent threshold. With regard to systems, the CPU usage should be high for threshold containerized systems and applications operating in the cloud. This is because it would mean that the user is effectively leveraging the investment and incurring less cost as the user is not spending more on additional instances. However in cases such as physical machine and legacy the user should wish for lower because in case they get more traffic, they would be in a better position to handle the extra load.

The user should find out  the best way to accomplish this. Often people group certain types of application into their own type of of monitoring idea and combine all of them together. Finally, capturing all this and setting that into the main DevOps dashboard that takes advantage of all the various kinds of metrics is the primary goal of cloud migration. It is not very easy. There are a number of instances where the organisation might not even possess tools that works with the system. Or even when they have the tools, it could be so old that a person will not be able to install some of the open source tools to work with it.

Care should be taken to ensure that the clouds are covered and all the tools that are used have the correct alerts and thresholds set. After that, ensure that it is rolled up into a good presentation layer. It is also important to ensure the consistency of the real visual presentation on a centralized dashboard. This dashboard might have a large number of customers, people from the command center,DevOps side, NOC or a SRE side. They might not require more information, however they should be equipped to respond to something as well as engage with the right set of people.  There might be some who wants more information and also able to get into the different perspectives  to get the details they require and ultimately compare metrics by metrics.

If an organisation is transforming the way developers operate, it implies that a culture change is needed, so an organisation might possess few tools for a long time. In some cases, organisations will also believe that the tools of cloud migration will fade away gradually. But, this might not hold true. Most of the time they become a permanent supplement to the tool chain which means that if they are a an element of the present DevOps tools that are usually used, that would be an improvement. After the culture shift, if things prove to be successful, people might not be willing to leave most of the things that were operating through the migration process so care should be taken to ensure that it is fitting to the devops process and culture.

Migrating to cloud infrastructure is  good way for organisations to enhance their processes, tool chain, culture and advance towards DevOps. Cloud computing is thus, an efficient way of transforming stagnant infrastructure.